UBM Bullish on Second Half after Strong Dollar Boosts Performance 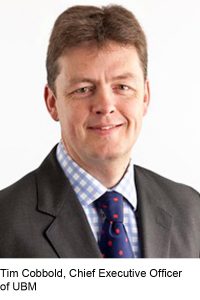 London, UK – The strong US dollar helped boost UBM’s financial performance in the First Half of 2016 and had company executives looking forward to solid returns in the final six months of the year.

Events revenues for UBM grew 1.3% in the First Half compared to the same period last year. However, it was a 6.5% “currency tailwind” that pushed the London-based company’s continuing revenues up by a robust 8.0%.

“Our performance in the first half was in line with our expectations and the business is well-positioned for a strong second half,” said CEO Tim Cobbold. He added, “With more than 80% of the Group’s revenues generated in the US and emerging markets and less than 10% from the UK, we expect little direct impact from Brexit and a benefit from the stronger dollar.”

In a presentation to financial analysts, Cobbold presented H1 as something of a landmark for the Events First strategy UBM launched as a means of dominating the booming trade show and events sector. The First Half saw UBM divest itself of its Electronic Media portfolio and the venerable PR Newswire (PRN).

“The sale of PRN was the final major step in the transformation of UBM into a focused events business,” Cobbold said. “More than 80% of revenues are now generated from events.”

“Going forward UBM’s performance will increasingly reflect the attractive characteristics of the events industry, and we continue to see high-quality acquisition opportunities to strengthen further the portfolio,” Cobbold said. He declined to provide any details of possible acquisition targets and insisted that UBM would be selective and not overpay for any shows or companies it might add in the coming months.

Cobbold said he was encouraged by the performance of its newly acquired Advanstar unit, and particularly MAGIC. He added that the benefits of this year’s acquisition of Business Journals, Inc. to UBM’s Fashion exhibitions would appear next year.

The performance of Interop was described as disappointing as was some of UBM’s luxury products shows in Hong Kong, but Cobbold described the overall performance in Asia as good.

In the meantime, UBM would continue to fine-tune its corporate operations in areas such as recruiting and legal and insurance services for shows in order to beef up the bottom line.