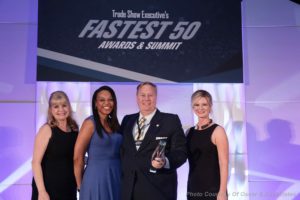 Industry insiders gathered in Chicago June 13-15 for this year’s event, which recognizes the fastest-growing trade shows in the country during the past year.

The speaker lineup included strategy-sharing TSE Trailblazers, an inspiring Power Lunch with SouthComm Vice President of EventsEd Nichols, who turned Firehouse Expo into a red-hot growth machine, and an up-close look at the M&A deal. That deal illustrated how independent and association organizers can work as partners, with Clarion UX’s recent acquisition of a stake in the National Grocers Association’s annual trade show being a perfect example.

Futurist, strategist, and social innovation expert, Ari Wallach, gave an illuminating keynote and lent his expertise on how to become a trend spotter in our fast-paced world.

The summit had plenty of social gatherings, too, including a murder mystery luncheon at Il Porcellino Restaurant in the bustling River North neighborhood, lessons from a Chicago mixologist on how to make awesome summer cocktails, and an awards-show afterparty in the Hyatt Regency Chicago ballroom.

The highlight of the summit was the Fastest 50 Awards ceremony, which honors trade shows that demonstrated remarkable growth during the previous year. TSE

“We all know that growth is one of the most important elements in the trade show industry,” Weiss said. “We awarded some very talented up-and-comers and enjoyed content carefully curated to help inform our Fastest 50 and Next 50 organizers and attendees.”

This year’s award winners represented a broad spectrum of sectors, from construction to Catholic education. Both CONEXPO-CON/AGG and MJBizCon picked up two awards each.

The coveted Rockstar Award went to American Society of Hematology (ASH) for its Annual Meeting & Exposition, a show that drew more than 26,000 of the world’s top hematology professionals to Atlanta last year. The top performer in the medical and healthcare sector which is the leading sector of this year’s fastest 50 list, the show’s impressive numbers were a 38.5% increase in the number of exhibitors and a 22.3% jump in exhibit space.

Here’s the complete list of the fastest-growing show awards that were handed out: