Super Precautions in Place for the Big Game 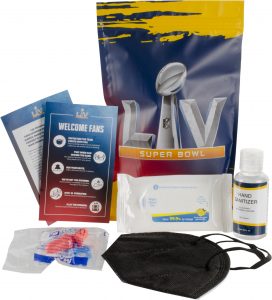 TAMPA BAY, Fla. – Many trade show executives will be watching Super Bowl LV carefully, and it’s not just this year’s matchup of the Kansas City Chiefs versus the Tampa Bay Buccaneers in Tampa that is of interest.

This year’s big game will include 25,000 fans, 7,500 of which are vaccinated health care workers. Might a gathering of this size inspire the trade show industry?

League commissioner Roger Goodell made a surprise announcement to a team of Sarasota Memorial Hospital health care workers via a virtual appearance during a Zoom meeting.

“The reason that I wanted to get on this call for a minute to thank you all, is I wanted to tell you we want your team to be there. If you’re able to swing it, I want to personally invite each member of your team to be our guests at the Super Bowl,” Goodell said in a video posted by the NFL to social media.

Many health care workers on the call were noticeably thrilled with the news and will come from hospitals and health care systems in the Tampa and Central Florida area. In addition to their Super Bowl tickets, they will receive game day experiences directly from the National Football League (NFL).

Sarasota Memorial Hospital is just over an hour away from Raymond James Stadium in Tampa, Fla., where the Super Bowl will be played. There will be 22,000 fans in attendance, of which 7,500 are health care workers. The other 14,500 are paying fans.

Talk about social distancing — the stadium, which holds 65,000, will be at roughly one-third capacity.

All fans in attendance will be provided a kit that includes personal protective equipment (PPE), including a KN95 mask and hand sanitizer, and will be required to adhere to safety protocols, including:

The NFL’s actions demonstrate that bringing large groups together is possible and that with careful planning, it can be done safely. To prepare for game day, intense discussions were held between the NFL, public health officials, the Centers for Disease Control and Prevention (CDC), the Florida Department of Health, and area hospitals and health care systems. Officials reviewed and provided feedback on the NFL’s extensive health and safety protocols designed to ensure the league can host fans and vaccinated health care workers safely and responsibly.

The NFL hosted more than 1.2 million fans at 116 games throughout the regular season and already has rigorous COVID-19 protocols in place that include mandatory mask-wearing, social-distancing, podded seating, and touchless in-stadium services at concessions, restrooms, and security checkpoints, as well as controlled entry and exit.

At this Sunday’s game, expect to see face masks and empty seats and a great deal of interest from trade show executives who will be watching the details associated with staging this super event during the pandemic.