London, UBM – Simon Foster was named CEO of UBM Americas, although his tenure with the newly formed division will be temporary. 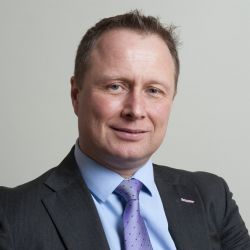 Foster, currently CEO of the UBM EMEA (Europe, Middle East, and Africa) division based England, will step into the position vacated by Sally Shankland effective June 29. He will be at the helm of UBM Americas until its integration of Advanstar Communications is completed by the end of 2016. Foster will remain at UBM’s corporate headquarters in London.

“Once the integration is well established, UBM will look to appoint a new leader for UBM Americas and Simon will return to his role as CEO of UBM EMEA,” UBM said in its June 8 announcement.

UBM planned to name an acting CEO for the UBM EMEA division, likely through an internal appointment, in the near future. UBM EMEA produces a large portfolio of conferences and trade shows in 23 countries and eight industry sectors, including technology, food processing and pharmaceuticals.

Foster joined UBM in 1998 and held a series of executive positions prior to taking over as CEO of UBM Live in 2008. UBM Live has since been renamed UBM EMEA. Previously, Simon led UBM’s Mexico and Brazil operations plus its Connect and Canon divisions, all of which are now part of UBM Americas. Foster played a lead role in the integration of Canon Communications into the UBM fold after its acquisition in 2010.

“Simon is very well placed to lead the UBM Americas business,” said UBM CEO Tim Cobbold. “He has extensive experience in managing integrations and has a deep knowledge of our products, key customers and people in the region, having had responsibility for many of these same business units.”

A new challenge for Foster will be absorbing U.S.-based Advanstar into the UBM world. Advanstar and its portfolio led by the massive retail fashion exhibition MAGIC Market, were acquired by UBM last year in a deal worth $972 million. Advanstar’s longtime CEO Joe Loggia and Executive Vice President of Exhibitions Tony Calanca remained with the company. Loggia is not expected to stay on once the integration is completed.

“The UBM senior management team is extremely strong and I look forward to working with them as we continue to implement the Events First strategy and integrate UBM Advanstar,” Foster said.