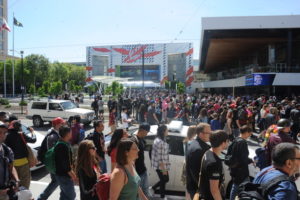 San Jose, Calif. – Silicon Valley Comic Con (SVCC), presented by Apple Co-Founder Steve Wozniak, has partnered with IRL Events to plan and produce SVCC 2018, which will be held April 6-8 at the San Jose Convention Center (SJCC) and surrounding areas. IRL also produces Anime Expo (AX) and E3 (Electronic Entertainment Expo), which ranked #40 on the Trade Show Executive Gold 100 Class of 2016. IRL Events has become an equity partner with SVCC, and IRL’s CEO Mary Dolaher will take over as CEO of SVCC. Outgoing CEO Trip Hunter will stay on as a partner and advisor.

“SVCC is truly unique because it brings science into the ‘con’ universe, on top of pop culture, entertainment, and tech,” Dolaher told Trade Show Executive. “So, it has a future-forward perspective that no other show can offer. Moreover, the show is perfectly positioned for growth given where it is located, who backs it, and the great fan support it has received over the last two years.”

Debuting with 60,000 attendees in 2016, SVCC expanded both its footprint and attendance, with 65,000 fans over the course of the three-day show in April. SVCC 2017 featured a number of celebrities, including William Shatner, John Cusack, Adam West, Buzz Aldrin, Tom Felton and Steven Yeun. The show attracted more than 400 exhibiting companies and filled all of the space at the SJCC.  This year’s event included a free public outdoor festival, programming at City National Civic, a Kids S.T.E.A.M. Lab, Geek Fashion Show, a science fair, dog cosplay contest and Space Village.

“We made huge changes and additions between SVCC 1.0 and 2.0, but our team didn’t grow at the same rate,” said Steve Wozniak, Co-Founder, SVCC. “Lab and digital cloning aren’t quite there yet, so it was time to bring in reinforcements!”

With the addition of IRL’s staff of 15 to the existing SVCC team, the show will double its staff size. IRL brings its experience running large-scale events like E3, which attracted 53,400 trade attendees and 15,000 gamers to the Los Angeles Convention Center in June 2017, to SVCC. Dolaher founded IRL after serving as CEO of IDG World Expo, and she has worked on E3 since the show was launched in 1995.

“With more than 25 years of experience in running events, I know a great one when I see it,” Dolaher said. “We look forward to being part of the show and its success in the years to come, and to working with the SVCC community.”

SVCC 2018 will be announcing new features and additions in the coming weeks, Dolaher said.

“With two booming startups – Primary Data and Silicon Valley Comic Con – Woz, Trip and I had to find a way to expand and prioritize our resources,” said SVCC Chairman Rick White. “Mary and her team at IRL Events have decades of experience running pop culture and technology events like E3 and Anime Expo, so we knew they were the experts to supplement our core team to take SVCC into the future.”

To learn more about SVCC or to inquire about exhibiting and sponsorship, please visit www.svcomiccon.com.