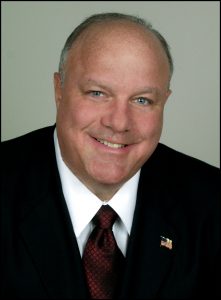 CHICAGO – Rick Simon, Chairman of Trade Show Executive (TSE) Media Group and President and CEO of United Service Companies, is this year’s recipient of IAEE’s Distinguished Service Award that is presented to an individual who has rendered outstanding service to IAEE and the exhibition industry as a whole.

Simon’s contribution to the industry over the past four decades, whether through his backing and support of TSE Media, or his volunteer board activities, is inarguably substantial.

Most recently, and perhaps, notably, his outstanding contributions include the creation and launch of the Trade Show & Event Recovery Act (TSRA) and a significant role in the development of the Global Biorisk Advisory Council (GBAC) STAR accreditation program and the supportive development of the Go LIVE Together (GLT) coalition. Since the start of the pandemic, Simon has been involved — front and center – helping, problem-solving, and navigating with other industry leaders the landmines presented by the COVID-19 pandemic that devastated the industry.

“Rick Simon is an industry visionary and an excellent practitioner. He is quite deserving of the IAEE Distinguished Service Award. When Rick called me and others, he had to explain what GBAC was and why it was important for the exhibitions and events industry to support and promote their programs. Today, over 300 venues and shows and supplier organizations have been either GBAC Star Accredited or have received the GBAC Technician Certification recognition. Their programs have helped our industry prepare to be safer and healthier now and into the future, as we continue to safely reopen our industry,” David DuBois, CMP, CAE, FASAE, CTA, President and CEO of IAEE said.

This recognition was announced during IAEE’s First Awards Watch Party held during Expo! Expo!, the first virtual show for shows. “It means the great people at IAEE have recognized the efforts that everybody has put into creating GBAC and GLT to help reopen and help the great organizations like IAEE and organizations, IAVM, as well as hotels and convention centers around the country. They are going to be the big helping hand to get our industry going again. Helping these organizations, that’s what I am happiest about,” Simon explained.

A man of service, Simon selflessly served in the U.S. Armed Forces and is a Vietnam-era combat veteran; and also proudly served as a Chicago police officer culminating in supervisory roles during his tenure before he retired honorably from the police force.

Simon has sat on and chaired countless boards, and most notably, served on the IAEE governmental affairs committee and has been an active member of IAEE — even when the association was named National Association of Exposition Managers. Through the years, Simon has also been actively involved with the Society of Independent Show Organizers (SISO) and was recognized by Tradeshow Week as one of the trade show industry’s most influential people.

Since 1980, he has served as an active member and chairman of the Chicago Convention and Tourism Bureau, now called Choose Chicago, and played a fundamental role in shaping Chicago’s trade show business interests and the sustained development of McCormick Place.

Outside of the trade show industry, his volunteer board work has also shone a positive light on the live events business. Last year, he served as the Chairman of Chicago’s prestigious Greater North Michigan Avenue Association (now the Magnificent Mile Association). He has also served on The Illinois Hotel and Lodging Association, Gateway Green, and Friends of the Park. Simon is deeply involved in and a significant contributor to The United States Marine Corps Scholarship Foundation, the Chicago Police Foundation, and the Chicago Police Memorial Foundation, where he also serves on the Board of Directors.

As Chairman and Owner of the TSE Media Group, Simon has offered this industry a rich forum to gain and share knowledge for more than 20 years. From its in-depth industry news articles, quality research products, and databases, TSE has become a distinguished B2B industry publication.

Through this nationally recognized B2B media outlet, Simon has provided a platform in which to celebrate, acknowledge and reward the stellar achievements of top shows, their show management, and service providers through two must-attend events: TSE’s Fastest 50 Awards and Summit and the industry’s “Academy Awards,” the TSE’s Gold 100 Awards and Summit.

“Simply put, without Rick Simon’s contributions, the trade show industry would not be what it is today. His dedication and passion is well documented and sustaining. Rick is a pioneer and visionary in many ways. This is a proud day for us at Trade Show Executive. Not only is he a great boss, but he has helped shape the industry, and his efforts continue to contribute to it today,” Trade Show Executive Vice President and Editor-in-Chief Gabrielle Weiss said.