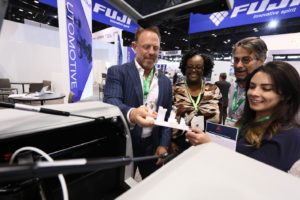 The Trade Show Executive Dashboard of Monthly Trade Show Metrics reported drops of 2.9% in exhibit space compared to September 2017. The decreases were higher in exhibitors and attendance numbers, which slumped by 3.5% and 3.8% respectively.

These across-the-board declines were attributed, in part, to show rotations. Of the 18 shows in September, only eight featured 100,000 nsf or more of exhibit space. Three shows were down in all three metrics, according to the Dashboard.

Yet there was still some positive news within the data, and a few shows that reported their highest numbers ever. Some of the highlights were:

The year will close out with a typically light holiday schedule, but still some sizeable, Gold 100 shows. Among them: Clarion Events’ POWER-GEN International, expected to bring more than 15,000 attendees and 222,000 nsf to Orlando; the Performance Racing Industry Trade Show in Indianapolis, projected to top 350,000 nsf with more overseas buyers and media.

Medical shows still to finish up 2018 include the Diversified Communications’ Pri-Med East in Boston, the World Congress on Anti-Aging Medicine in Las Vegas, and the 60th American Society of Hematology Annual Meeting & Exposition in San Diego.