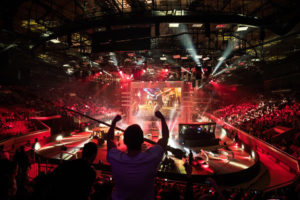 CINCINNATI — An upscale movie theater in suburban Cincinnati is the latest venue to offer event organizers space suitable for the rising esports sector.

The Envision Cinema Bar & Grill in Blue Ash, Ohio, was the site of an April launch party to unveil PiviP, an enthusiast event that will debut next spring with conference sessions, exhibits, and, of course, a live videogame tournament that spectators can follow on the theater’s movie screen.

PiviP is a co-production of the esports event organizer AllMid and Bill Donabedian, who also runs the regional event organizer Brandemonium. “Esports and the video game community are growing like nothing I’ve ever seen before,” said Donabedian in a news release. “It will be exciting to bring this kind of energy to the Cincinnati area next year.”

Streaming video technology and social media have made it easier for fans to tune in and follow the proceedings at esports events, including tournaments and trade shows. The Electronic Entertainment Expo (E3) was among the early adopters of technology that allows non-attendees to listen in to keynotes and other presentations. They have also been able to look over the shoulders of players trying out the new games on display at the Los Angeles trade show. The tally from last year’s show included “tens of millions of gamers” watching a combined 5.5 million hours of content over Twitch, the “official streaming partner of E3.”

Face-to-Face Has a Place

The rise of esports quickly caught the eye of trade show organizers. Access Intelligence announced in March it would launch Esports Business Summit on Oct. 1-3 at Caesar’s Palace in Las Vegas.

The conference, run by three AI subsidiaries, will dive into the business opportunities evolving in the esports space, including marketing strategies, budgeting and venue selection.

“This event is unique because it unites all sectors of the esports business and allows us to deliver a unique networking experience for both esports veterans and those just discovering the business potential of this rapidly growing industry,” said Chris Pursell, Director of AI’s Sports Content for Cynopsis Sports, who is developing the content for the conference along with along with Jessica Heasley, Group Editor of Chief Marketer and Event Marketer.

Despite the worldwide reach of esports streaming technology, there are also new opportunities for launching new tournaments in a physical setting well beyond hotel ballrooms and movie theaters.

Las Vegas recently christened a permanent esports venue at The Luxor. The Esports Arena Las Vegas covers 30,000 square feet (sf) on two stories and includes a VIP lounge and a menu developed by celebrity chef Jose Andres. The entire arena or parts of it are available for private parties, and day passes are available to the public for $25.

Not to be outdone, the city of Arlington, Texas, is going all in with a plan announced this Spring to spend $10 million to convert part of its convention center into a 100,000-sf esports arena. The project includes renovating meeting rooms and the center’s ballroom so they can accommodate esports gatherings. The rooms and the center’s 48,600-sf exhibit hall will still be available for other types of events, according to Director Mike Hunter. “We look forward to esports enhancing our product offering, and we know it will allow us to continue providing a positive economic impact to the City of Arlington,” he said.