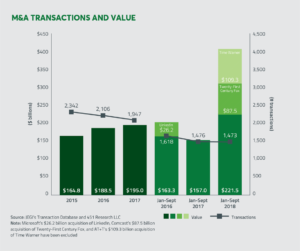 NEW YORK – Continuing good news on the economic front has given a boost to mergers & acquisitions (M&A) in the trade show industry, which should continue at least into next year, JEGI said in a new quarterly review of activity in the media sector.

The first half of 2018 included Informa’s blockbuster acquisition of UBM, an act that was virtually impossible to follow up in Q3. But when the three annual quarters were combined, exhibitions and conferences put up better numbers in 2018 than they did during the same period last year.

“Buyer interest and transaction volume continue to grow, year over year, given the strong appeal of consumer and B2B events and their attractive business models,” said JEGI, citing the overall high cash-flow conversion and negative working capital requirements of the sector.

JEGI noted 57 transactions in the exhibitions-and-conferences space during the first nine months of 2018, a 21% increase over 47 deals struck during the same period in 2017. The value of the deals totaled more than $7 billion in 2018, more than four times the $1.4 billion rung up in the first three quarters of 2017.

The coming year should see a continuation of interest in the M&A arena, JEGI said, although it will probably include a relative lull wrapped around the holidays. “While M&A activity is expected to remain high well into 2019, we’d expect to see a potential ‘pause’ in Q4,” the report said. “Corporate buyers, especially those with global operations, face a number of regulatory and geopolitical developments with potential implications for M&A strategy, such as tariffs, NAFTA, and Brexit.”

JEGI also noted that a number of the major players in the overall sector were regrouping this fall and reviewing the state of their portfolios at a time when the direction of interest rates has given financial buyers pause and could “impact decisiveness” if they continue to creep higher.

Meanwhile, the exhibitions industry itself is expected to generate modest growth in show metrics and revenues in the second half of 2018, according to the Center for Exhibition Industry Research (CEIR). The latest CEIR projections issued in September said Q2’s 1.6% growth rate would pick up some steam in the second half and into 2019 as long as the economy and international political situation remained stable.