CEIR Survey Predicts Recovery in Second Half of 2021 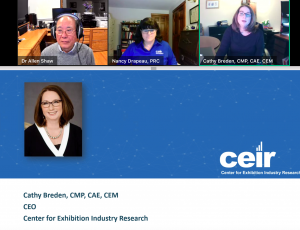 DALLAS — Just-released research from the Center for Exhibition Industry Research (CEIR) presented during a webinar this week foresees brighter days ahead, but predicts that the industry will remain in the middle of the proverbial “tunnel” until the second half of the year.

The biggest proof of this can be seen in staff cuts, with the average pay cuts now at 29% — and 37% of respondents saying that current layoffs will likely be permanent. “As COVID persists, the impact is being felt on more staffs, and this is the saddest result of this survey organizationally,” said Nancy Drapeau, CEIR’s VP of Research.

The percentage of event portfolios being canceled altogether has decreased from the last CEIR survey, released in June 2020 — from 72% to 52%. Cancellations are happening across all event sizes, with the highest incidence in the South and West.

The percentage of portfolios being postponed has grown, from 49% to 57%. The majority of postponed events are mid-sized and 76% have been moved to the third or fourth quarter. The biggest reason for cancellation was uncertainty as to whether large gatherings would be allowed due to lockdowns, followed by corporate no-travel policies and participants’ fear of traveling.

A model created by CEIR’s Chief Economist, Dr. Allen Shaw, predicts that the pandemic will have peaked in January and the events industry will exit the tunnel soon, with small, regional events already beginning to happen and larger shows picking up in the third quarter. “Because of President Biden’s systematic approach to tackle the virus and the additional rescue program now under negotiation, the probability for this scenario is high,” Shaw said.

“U.S. new cases are now plummeting after three waves,” said Drapeau. “The only unknown is these various mutations, but the rush to vaccinate, along with everyone following public health recommendations, can help protect us from that.”

“There’s opportunity for the second half of this year and I see more postponements, which is heartening,” she concluded. “How close are we to the end of the tunnel? Not as close as we’d like to be, but given a new administration that’s laser-focused on this, we hope we will get to there more quickly.”